Here are some pictures of my recent trip to the Lama Temple. This temple is located in the North East part of Central Beijing, within an old Hutong district that is still relatively intact.
Once a former imperial palace, it is now one of the most famous Buddhist monasteries in China and thus receives lot’s of tourists and pilgrims annually. It is also now as Yonghegong Temple, after the name of one of the emperors from the Qing Dynasty that lived there up to 1735.

After Yongzheng’s death in 1735, his coffin was placed in the temple. Emperor Qianlong, his successor, upgraded Yonghegong to an imperial palace with its turquoise tiles replaced by yellow tiles (yellow was the imperial color in the Qing Dynasty). During the 9th year of Emperor Qian Long’s reign (1744), it was converted into a lamasery and became a residence for large numbers of monks from Mongolia and Tibet.This is a kind of friendly policy that the Qing dynasty deal with the relation with Mongolia and Tibet. That is the reason why the Great Wall was not massive constructed during the Qing dynasty. (this last part as found on beijingservice.com/lamatemple.htm ) 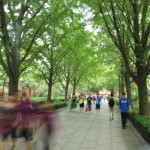 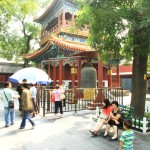 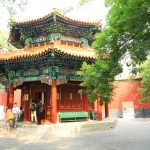